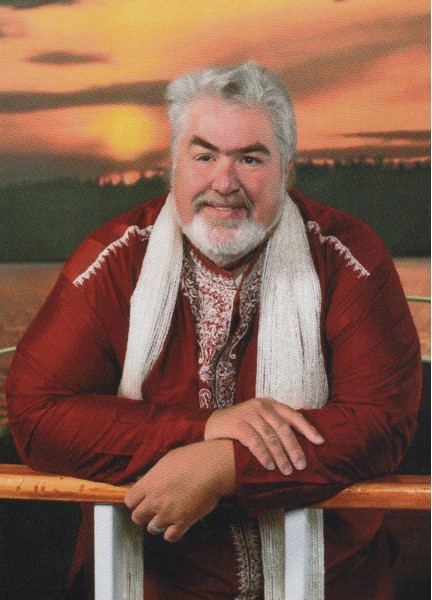 John Newton Enloe, 59, affectionately known as "Bear" or "Papa Bear" to everyone, passed beyond the cares of this world and into the Light Friday July 17th after a brief illness.

He was preceded in death by his father, Bobbie Enloe and mother, Sharon Merget and will have a welcoming committee of family and friends he missed dearly.

Bear is survived by his loving wife Barbara (Ania) Enloe, who will miss him every moment of everyday until she is called to be by his side. He is also survived by brothers Robert Enloe (Mark LaCount) and Arthur Merget. Sisters Lori Heinecke (Mark), Teri Merget, and Julie Erickson Oesau (Scott). Step-mother Audrey Enloe and Step-father Terry Merget (Mary Jo) as well as numerous aunts, uncles, cousins, nieces and nephews. Also survived by the grand-children of his heart Don, Logan, Eddie, Talan, Kristin and Bradley.
John graduated from the University of Milwaukee with a degree in Film Studies and while he did work in television for years including Community Television of Knoxville teaching people to make their own programs, he was never limited to a single endeavor. He had worked as a teacher in the schools, craftsman apprentice and glassblower at Dollywood and at one point owned his own photography business. He loved to work with his hands which lent their skill to blacksmithing, woodworking, baking and decorating wedding cakes, metal work, weaving, just to name a few.

Music spoke to his soul and he loved to sing in his powerful, rich voice. At one point, while on a cruise, Bear actually developed a following of "groupies" from singing Karaoke in one of the lounges. Many a time he raised his voice in song to the enjoyment of all who heard him.

Interested in everything and everyone, no one who met the Papa Bear ever forgot him. He had gentle heart and a passionate soul for those he loved and the world around him. He was always on the lookout for the next fascinating thing which ranged from medieval recreation in the SCA to cooking gourmet meals for loved ones (including the Sunday morning ritual of soft boiled eggs and toast with his wife, that he referred to as "sexy eggs") to volunteering at the Knoxville Zoo.

Bear's favorite places were home and Disney, both of which he shared with his wife Ania. He found joy and brought joy throughout his entire life despite the struggles that the years and health issues brought. He never met a stranger and opened his heart and hands to all.

John left this world too soon, but it is a better place for him having been in it. He has left a large hole that will never be filled. However, the memories of him will lift up all who knew him.

Papa Bear had always wanted a party, a Celebration of Life when he passed. With the world in chaos at the moment, he would not have wanted nor expected his loved ones to risk their lives and health to gather in his memory. In the future, when there is a pause in these current troubles, there will be time to gather.

For now, we all will grieve in our own way. We will also celebrate every time we think of the Bear and enjoy something he would have appreciated.

For those who wish to honor him further, please consider a donation to Zoo Knoxville in his memory. His time as a volunteer there was near and dear to his heart because it gave him purpose and a way to serve his community. Donations can be made at https://www.zooknoxville.org/donate-now/ or you can contact Sharon Moore at the zoo at: [email protected]

Gentry Griffey Funeral Chapel & Crematory are honored to serve the Enloe family and invite you to sign the guest registry.

We are so saddened for the death of John. Our hearts go out to Barbara and the family who will miss this beloved man and grieve for him forever. May you, Barbara, and your family find strength from each other as you navigate this very sad event. Much love and sympathy, Marilyn & Phil Kentfield

Barbara, so many are praying for you. We love you and know this has been a very difficult time.

Barbara, what a shock I am so very sorry for your loss> He was a precious man and I will miss seeing him when I drive out the street John will be a special addition to Heaven God has welcomed him with open arms and he will rest in peace while he waits for you

The services for John have not yet been added. Please sign up below to be notified when the services are ready.

The attached photos are added to the memorial of John Newton Enloe to help share their legacy.

Thank you for sharing your memory of John