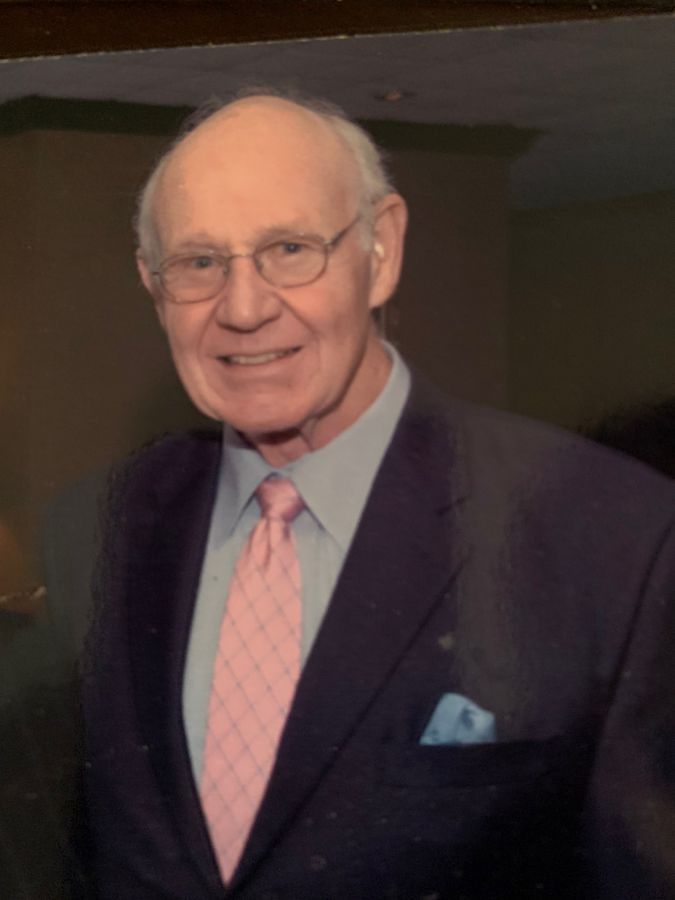 David Michael Stratton, age 78, passed away on March 25, 2020 at University of Tennessee Medical Center. He was a devoted husband, brother, father, grandfather and great-grandfather. He was born in Vonore, Tennessee on April 10, 1941 to Worth and Helen Stratton. He graduated from Tellico Plains High School and went to the University of Tennessee on a football scholarship in 1958 and played at the tight end position. He was drafted by the Buffalo Bills in 1962, and played at the linebacker position for 11 years. He also played one year with the San Diego Chargers. He considered Buffalo his second home. After his football career, he owned Financial Solutions for many years as an insurance agent and financial advisor. Upon retirement he was active in his local NFLPA chapter of retired players. His retirement years were filled with family and friends as well as many ski trips as he came to love the sport. He also enjoyed fishing on Melton Hill Lake in West Knox county where he lived for 32 years. He was very active in and loved his church family at Apostles Anglican Church. David is survived by his wife of 57 years, Jane Edmonds Stratton, his brother, Joe E. Stratton of Birmingham and his great-nephew Joseph Stratton, also of Birmingham; three daughters: Melanie S. Patterson (Jacksonville, FL), Melissa A. Stratton (Powell, TN), Michelle S. Kenley (John) of Columbia, TN; and 1 son: David Michael Stratton, Jr. (Jeneen) of Maryville, TN; 10 grandchildren: Preston Shane Patterson (Rachel), John H. Kenley, Jr. (Mary), Benjamin E. Kenley (Reagan), Tyler A. Hayes (Morgan), Brianna Patterson, Abigail Patterson, Ez Patterson, Jared Stratton, Natalie Troth, and Alena Kenley; and 2 great-grandchildren: Ellis Patterson and Brielle Hayes. There will be a private, family memorial service. In lieu of flowers, memorials may be made to The Boys and Girls Club of Knoxville or The Wounded Warriors Foundation. Gentry Griffey Funeral Chapel is honored to serve the Stratton family and invites you to view and sign the online registry.

Mike was a special friend. I served with Mike on the UT Letterman Board. He was like "EF Hutton" didn't have a lot to say but when he did speak everybody listened. Gave me great advice about life. I loved just setting and talking with him. He will be truly missed. Chris Wampler

I knew Mike when he played football at UT. Rest in peace Mike my dear friend. You will be missed. My prayers go out to his family.

Ralph( Butch) Baldini I will always remember meeting Mike in our stadium dorm room in Aug. ,1959.Mike was my roommate, teammate and lifelong friend. Although we lived 500 miles apart ,we remained close friends. I will miss Mike! To Jane- Linda and I send our love and sympathy to you, your children and family.

Jane,
I, unofficially, met Mike in 1964. The AFL championship game was won by Mike's stellar defensive performance including one game changing play. He was referred to by his own teammates as "Dr. Jekyll & Mr. Hyde".....a total gentleman off the field but an absolute terror when he stepped on the field!
We finally met in 1976 where we worked & played together for many years. I could never come close to hitting his T-ball shots!
I'm grateful to have visited with him in the hospital. Thanks for the memories Big Guy.

Mike was a wonderful guy to ski with and share life stories. He will be greatly missed. Praying for comfort and peace for his family. Rick Eudy

It was my honor to have met and ski with "Mike" several seasons in Breckenridge ,Colorado.He skied with the same passion that I found him to exhibit in living his life.I was honored to call him a friend and I know I will sorely miss his presence every ski season . ( John Ng ,a ski buddy ).

I met Mike through the ski club. We became quick friends. I always enjoyed skiing with Mike and Joe. I remember a ski club trip we were on about 20 years ago. I was always hanging out with Mike and Joe on the slopes and after skiing. Some people on the trip thought I was one of the Stratton brothers. It was an honor being the third Stratton brother even if only for 1 week. Rest in peace brother.

My first encounter with Mike was getting to know him as we played football for the" Big Orange" University of Tennessee. In later years we served together on the Board of the University of Tenneessee Letterman's Club. He was a dear friend and I will lmiss him deeply. Charlie Severance

Mike was always gracious and humble. In all he did it was with class. Rest In Peace.

Very deeply saddened by the news of Mike's passing. My heart goes out to you all. Our grandchildren will dearly miss their "Grand Daddy".
Darleen Kenley Carter

Jane, we are so sorry for your loss. We sure enjoyed seeing him drive his convertible thru the subdivision. Our thoughts & prayers are with you. Bill & Martha Hays

We met Mike Stratton in the summer of 1992. My husband was in Blount Memorial Hospital and Mike’s mom was also in there. I knew his mom and dad. We talked to Mike for awhile because his mom had just been diagnosed with cancer. My husband also had cancer. We talked to Mike about how we helped take care of his mom and dad. Mike decided to take his mom to his home. I am kin to Mike through his dad and my hubby is kin to him through Mike’s dad. Bill’s mom was a Stratton. Praying for the family during this time. Bill and Anne Beaver, Greenback, TN

I so enjoyed the many years that I knew Mike. Had many great conversations with him at the Davis YMCA in west Knoxville. He was a great NFL football player but more importantly than that he was one of the finest gentleman that I've ever had the pleasure of meeting. RIP Mike and you were a fine man!

I enjoyed knowing Michael over the years and having lunch with him at our Optimist club on Fridays for many years as well as our annual picnic at your house on Melton Hill. I will miss him. My condolences to Jane and all of the family.

I now live in Florida, originally from Buffalo. My Father and 2 brothers had seats in the end zone for that 1964 AFC championship game. The “PLAY” came right at us, and I can still see it and feel the excitement of the moment! I’m sure it showed the passion and intensity with which Mike would have for the rest of his life. RIP # 58 .........Walter Daly (brother of Bill Daly, Louisville, Tenn.)

Mike, we are going to miss you greatly. You were an inspiration to our golf group, to our men's bible study groups, and to the furniture ministry. I was shocked to hear that you could not win this battle, you won so many recently. Our prayers are with your family during this time of grief. Thank you for being such a good friend to us all. David LaRose

Rest in Peace, my dear friend. And Peace be with your family in these difficult times. I will always cherish the times we spent together in our younger years and later in life after your Buffalo Bills days. Jack Kile

David, Joe and I had some great times during our youth at Tellico. They were good friends and came from a great family. I have so many great memories of David.

i would speak with Mike at the 'Y' when he was there. he autographed a golf ball for me once and was surprised that i knew who he was and asked for his autograph.

What a shame. I loved to play golf with Mike. He was one of the "good guys" in this world.

I'm still stunned and it's difficult to believe this is real. My deepest sympathy goes out to each of you, prayers that God holds you tight during this time of loss. Please know that I always appreciated my friendship with Mike. He was a wonderful man and a great friend. Lisa G. Huber

The services for David have not yet been added. Please sign up below to be notified when the services are ready.

The attached photos are added to the memorial of David Michael Stratton to help share their legacy.

Thank you for sharing your memory of David